My kids had a half day of school on Friday, so I picked them up and took them snowboarding for the afternoon, and then out to dinner with my mom, brother, and younger sister and her family.  It was a fun day, but I didn't get a lick of sewing done.  I had prepped some hexies to work on at the ski lodge, but my 2 year old niece was there, so I spent the time hanging with her.

In light of my family-heavy Friday, I had no qualms about sequestering myself in my sewing room this weekend.  Not only did I do a major re-organization and cleaning in there (my brother is spending the night tonight, and since my sewing room is also my home office and my guest room, it needed attention before it was ready for a guest), but I was also able to move four projects forward. 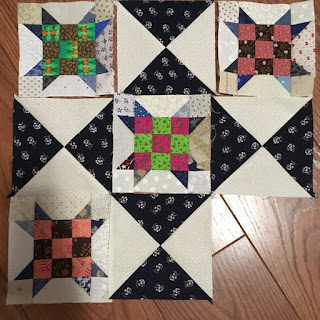 My question, though, is this: Since the blocks are so scrappy, should the QST blocks be scrappy, too?  I mean, instead of using one constant neutral and one constant navy blue (although it looks black in the photo, doesn't it?), should I use a variety of neutrals and blues for the alternate blocks?  If you have an opinion, please chime in!

And finally, today I rearranged my Starburst quilt a bit so I can start to quilt it.  When I finished the flimsy in October 2016, I noticed in my photograph that the yellow and green blocks in the bottom right corner should probably be swapped, but ugh!  Unstitching?  Yuck! 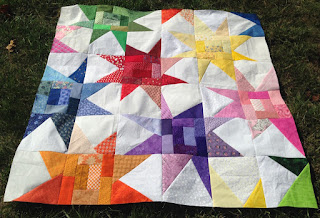 So I just let it sit.  And sit.  And sit.  But the baby I've decided to give it to is due in less than two weeks, so it is time to stop sitting and start quilting.  So I swapped the green and yellow blocks (in the lower left corner in this photo).
Does it make a big difference?  No, but it isn't niggling at the back of my mind now.  My goal is to piece a backing and have it basted no later than the end of the day Tuesday.

Tuesday is also the day that I'll be choosing recipients for my 5 quilt projects that are up for adoption.  If you haven't checked out the quilt adoption items at Cynthia's blog, be sure to hop over there - there's some fun stuff up for grabs for free!

I'm linking up with Monday Making and Oh Scrap.
Posted by Vesuviusmama at 7:18 PM 5 comments: