Some days are diamonds...

But not lately. This is the least relaxing vacation EVER. The plan was to go to my mother-in-law's house for a week. The plan is still to go there. However, we found out just before leaving that she is in the hospital. So yesterday morning as we were loading up the car, we were already in a more subdued mood than you would expect. We set off, the hubby, the dad-in-law, the two kids, the dog and I, towards the interstate the back way. I'm not sure why, except that it is shorter. However, the back way is usually not such a good idea when you've just gotten over 2 feet of snow the day before, especially in a state like Virginia where the Department of Transportation, despite their best efforts, is not prepared for snow in that magnitude. Not 8 miles from home, we got stuck, and stuck GOOD. Eventually, we got out, but not before blowing a tire. So now, we can drive, but we have to find a place in the road not covered in snow and ice to change the tire. The kids, the dog and I just started walking home. We needed to do something - the kids were very well-behaved, but I knew that just standing around outside the car wasn't going to be a good idea. We sang Christmas carols to keep our minds off the fact that our feet were freezing in our sneakers. About a mile or so later, the hubby and dad-in-law showed up with the spare on the vehicle, and we set off again, first stopping by a service station to make sure the spare had sufficient air.
It felt like such an accomplishment to make it onto the highway, but only until we actually got on the highway. It looked more like a parking lot for tractor trailer trucks. Four and a half hours after leaving home, we made it to the next town 30 miles away. We stopped to eat because the kids (and I) were starving. At that point, we made an executive decision to head back home and try again another day. Seven hours after leaving home, we made it back, having traveled a whopping 60 miles.
If that were the end of it, I wouldn't complain. However, when we got home, we had no water. Not much you can do on a Sunday night. This morning, I started calling around, and finally found someone who could come today. Of course, I thought he meant today during the day. He arrived at 8 PM. In the meantime, we all loaded into the car to go to the gym at the University where my husband and I work to take showers and brush our teeth. And I melted snow. Melted snow to wash dishes. Melted snow to flush toilets. Melted snow for the dog and the cats. Melted snow to brush our teeth. At this rate, there won't be much snow left out there.
So, the water pump guy is still here. No, not working on my water pump - he needs a new control box, which he didn't have on his truck. He'll have to come back in the morning for that. No, he's still here because he managed to drive his truck into a snowbank, and then over an embankment and into my neighbor's yard. It is 10:15 PM and we are waiting for the wrecker to come pull him out.
I am so tense that my shoulders ache. I keep wondering what else could go wrong. I'm probably looking at this the wrong way. There is so much I should be thankful for. We have heat and electricity and food, and a way to make the water we need. My kids are in great moods because I have let them watch all theTV they want today. And this unexpected time at home has given me some unexpected time in my quilt studio. I thought I'd whip up a quick placemat that I found online earlier this year. 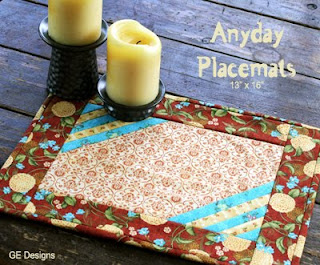 Oh boy, so quick and easy, I made FOUR. I am currently sewing down the binding - photos when I am done. But first, I am dragging my tired and slightly defeated butt off to bed. Last night I told myself that tomorrow had to be better, but I seemed to have jinxed myself. Tomorrow will be what it will be.
Posted by Vesuviusmama at 6:59 PM 9 comments: