I've enjoyed participating in Barbara Brackman's Westering Women BOM.  Well mostly, anyway.  There have been two months so far where the block included set-in seams, so I've skipped those months.  I'm a wimp, I know.

But in light of my recent victory over my fear of machine quilting, I decided to suck it up yet again and give those Y seams a try.  First stop, March's block, Sweet Gum Leaf.  Lord have mercy, that block nearly killed me!  I labored over it all day long! (well, in between helping customers and restocking yarns and paying bills and all the rest that goes on during the course of a day in my shop)  But still, just one block to show for my day! 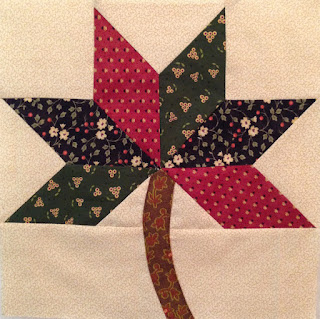 It isn't perfect, but it is done.  I can safely say I'll never make an entire quilt out of that block.  At least not without redrafting it to include all HSTs instead of those blasted parallelograms!  And even though I typically do needle turn appliqué, I sewed that stem on by machine just to be done with it!  Tomorrow, I'll give the other block I skipped a try, August's Chimney Rock.  You can bet the farm that I'll be doing the version WITHOUT set-in seams!

In other news, I shipped out 4 of the projects that I adopted out for the Quilty Adoption Event last weekend.  Congratulations to:

I've emailed Anonymous at valekort at yahoo dot com as the winner of the Scrappy Spools project, but haven't heard back.  If I don't hear back by the beginning of next week, I'll choose a new winner.  Thank you to all of you who volunteered to take some of these projects off my hands.

Since I've divested myself of 10 projects in the last 6 months, I couldn't help but throw my name in the hat to adopt someone else's orphans.  I scored these pieced setting triangles.
Woo hoo!  I love the idea of pieced setting triangles, but doubt I'd ever take the time to make them.  Now I don't have to!  I do have to come up with a project to set them with, though, and the prospect of that just excites me!

Have a great weekend, everyone!  Tomorrow is my 45th birthday, so I'm having a 45% off sale at my shop, you know, to ensure that I won't be sitting there sad and lonely at work on my special day.  Last year it was a blast, people there all day long.  Hopefully tomorrow will be the same.
Posted by Vesuviusmama at 4:17 PM 3 comments: