If you have had a chance to read my last post, you know that I was in desperate need for 1) some down time and 2) some successes, no matter how small. What better way to get both than through quilting?
On my drive home from West Virginia on Saturday afternoon, I stopped at Tamarack as I always do. I love looking at all the craftsmanship, and since there are so many quilts, getting ideas. I forgot my camera (no big surprise if you remember all the other things I forgot on that trip!), but I did have my handy-dandy little graph paper sketchbook. I jotted down prices and sketches and whatnot as I made my way through the wares.
I came upon a very simple table topper, machine quilted in the ditch, selling for $42. Some of the prices amaze me - I couldn't imagine paying that much for something so simple. But it gave me an idea of something I could make to feature some focus fabric that I had recently acquired.
Rewind to LAST weekend, which I know I never posted about. Pinewood Derby for Cub Scouts and the quilt guild meeting took place at the same time. I was loathe to miss either, and found myself racing back and forth several times. Jason's Pinewood Derby car came in last every time, but I told him that 4 was my favorite number (that's how many cars in each race) and that he should be proud. And at the quilt guild meeting, a woman was selling off LOTS of books plus a few other odds and ends. I picked up two panels from her for $1 each, as well as a book, Quilting (Instant Expert) by Jenni Dobson. (Note to publishers: when you make a book spiral bound like this one, I am very likely to buy - I LOVE spiral bound quilting books!!!) 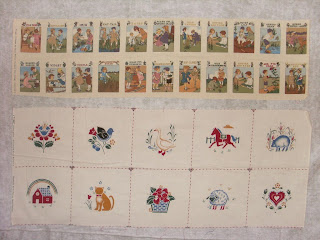 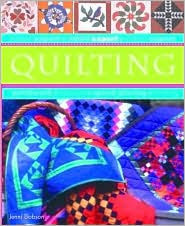 I began with the stencil panels - we finally bought seating for our home theatre (after it is delivered later this week, if I disappear for a while, don't worry - I'll eventually run out of movies that I haven't seen on Netflix and re-emerge) and I figure we need some lap quilts to snuggle up with while we are watching movies. Right now, we share blankets on the (world's ugliest and most uncomfortable) couch that is down there now, but these are 2 rows of 3 reclining leather seats with armrests with drink holders in between. It would be awkward to share a blanket over the armrest, especially if there is a drink up there.
So I began to play with those stenciled panels, setting them in a square and putting them on point, but in my mind's eye, I only saw myself using 8 or 9 of the panels for this small quilt. 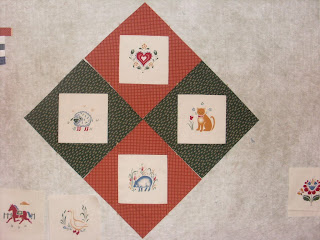 I decided to whip up a tabletopper or wall quilt using one of the remaining panels. Sketched, cut, sewn, sandwiched, HAND quilted and bound, all in a day and a half. 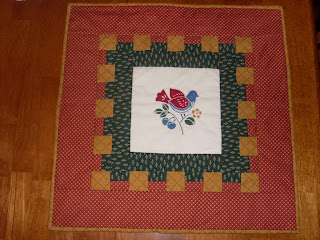 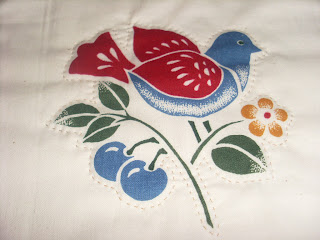 I feel so accomplished and rejuvenated! And I like it so much, I may just whip up another one and commit myself to only using 8 panels in the lap quilt.
Of course, if you know me at all, you are probably scratching your head at all the matchy-matchy stuff I'm working on - where are the scraps!?! Never fear, they were my leader/ender project as I played more with my 1.5" scrap squares. 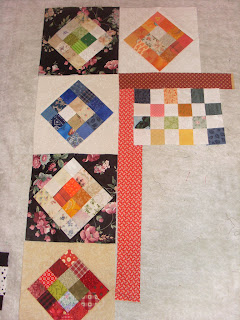 Another home theater lap quilt in the works?
Posted by Vesuviusmama at 5:00 AM 5 comments: