I'm feeling a bit blue today.  It is probably partially the weather - the sun has only been out for about 3 hours total in the last 5 days.  But it is also partially all the BAD that happens in the world.  You already know about my young, new dad co-worker who was diagnosed with ALS.  I wish they would hurry up and find a cure because he's a great guy, and his family needs him.  I support him as much as I can at work and through his website, but I wish there were more I could do.

Then, two weeks ago or so, there was that drive-by shooting in Seattle.  That shouldn't affect me much living in Virginia, right?  Wrong.  The girl who was killed was the girlfriend of my uncle's girlfriend's son, a family that has been in my life for over a decade.  So while I didn't know Nicole Westbrook, I'm really hurting for her boyfriend who held her as she died, and his mom who just wants to take the pain away for her son, and my uncle, who is surrounded by grieving people.  To say nothing of Nicole Westbrook's family.
﻿

Then, last night, my husband told me that the younger brother of one of his former players has leukemia.  This is a kid I saw regularly for 4 years, a kid named Zippy whose zest for life matches his name, a kid whose adult life hasn't even begun yet.  Again, I wish I could help, but what can I do?  I can donate money, and I can make a quilt, so that is what I started last night.  I'm hoping to make something like this Fading Charms Quilt, but with larger squares so I can get it together faster.  We'll see.

On a happier note, I did finish putting the borders on my Good Fortune Lil Twister quilt last night AND I straightened up my sewing room a bit so that it doesn't so much look like a real twister hit it.﻿ 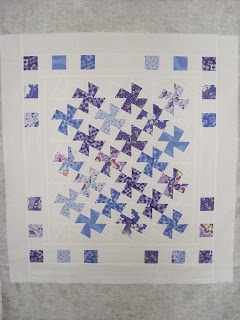 Anyone know a good joke to cheer me up?
Posted by Vesuviusmama at 7:49 AM 12 comments: