Do you ever want to quilt so badly that the longing for it is almost a physical sensation?  That's what I'm experiencing right now.  I attended a conference in Anaheim, California this past Wednesday through Sunday, so boom - five non-quilting days right there.  Instead, I took some yarn and started a new pair of socks. 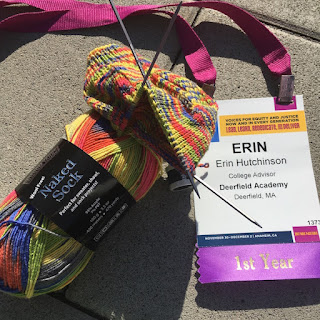 Then, ever since I got back, I have been working non-stop (at a boarding school, it can seem that way anyway - I was working/on duty from 8:30 AM until 11:00 PM today with just 1.5 hours off, during which I had to go to the grocery store and pick up my son from basketball practice).  Where is the time for sewing???

With Clue #2 released last Friday, I've been itching to work on my On Ringo Lake mystery quilt.  I've managed just ten of the required 200 flying geese blocks so far, but I'm hopeful that I'll have some time later this week to catch up before the third clue is released. 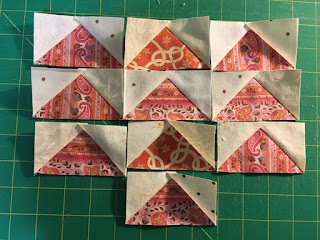 In the meantime, I wonder what we'll do with these flying geese...with four times as many flying geese as nine-patches, maybe they will go around the nine-patches to make stars...only time will tell! 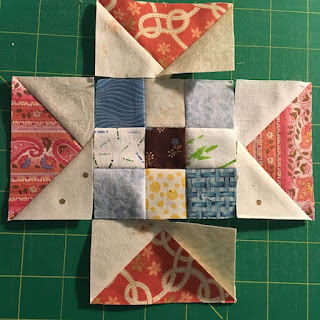 I'm linking up with Monday Making and Oh Scrap!
Posted by Vesuviusmama at 8:22 PM 5 comments: