I have been admiring the Block Lotto blocks I've been seeing over at Julie's Joe Tulips Quilts blog for quite some time.  Here's the post that put me over the edge, making me resolved to participate, but if you search her blog, there are TONS of awesome block lotto blocks on there, and she wins A LOT!  I hope I have her luck!

So here's my first block.  I used up the rest of that greenish teal solid that I bought in WV and then used nearly all of in the world's heaviest quilt block (the Pine Burr block). 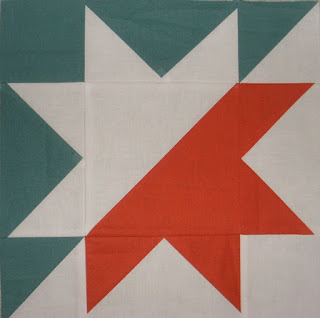 This weekend was much busier than expected.  Saturday morning, I was an uke (think rag doll/punching bag/test dummy) for a young woman who was testing for her first degree black belt test.  It was actually quite fun being thrown around repeatedly, but boy, was I sore on Sunday!

Of course, that probably had something to do with what we did Saturday afternoon.  The Farm Store had a big Fall Farm Festival day.  There were vendors and tractors and livestock and a corn maze and lots of other things to do.  It's how we spend the rest of the day.

So, a Saturday where I barely saw the inside of my house, I was resolved to stay home on Sunday.

It was not to be.  My oldest, Jason, has been asking if we can go to church.  How do you say, "Mom is too lazy to go to church," while still setting a good example for your children?  For a while, I could put him off because I wasn't sure my beliefs would line up with those of the parishioners at many of the area churches, but I keep meeting some pretty progressive, liberal, and NICE people who go to a local church, and they have invited me time and time again.  So we went to church yesterday.  Jason was so excited, and dressed to the nines again (no hat this time, but a sweater vest and bow tie - forgot to take a photo).  Donald was despondent, and walked in his slouchy "I'm doing this only under duress" way until I threatened him with not being able to watch The Cosby Show with us (that's our new family evening activity - we bought 4 seasons worth!).  I was somewhere in between - mostly just thinking of all the time I wouldn't be able to spend quilting.  Sounds terrible, I know.  I hope I don't lose any readers over that confession.

But church was nice, and afterwards, Donald came bounding out of the enrichment room to show me what he had made and then ran off with a new friend to scarf down cookies and lemonade before playing in the church courtyard.  We'll probably go again.

OK, lazy Sunday afternoon coming up with lots of sewing, right?  Wrong!  My hubby called to see if we wanted to go on a family outing.  Our jobs are both so busy that it is rare that we have time to go out as a complete family, so, of course, I said yes.  We got back at dark.  It was fun, but now I am wishing I had one more day to the weekend so I could stay home and sew!  And wouldn't you know it, my kids don't have school today!  I left the house grumbling this morning, wishing I were still in bed like the rest of my family.
Posted by Vesuviusmama at 5:55 AM 2 comments: