Not much sewing happened at my house last night. First of all, there was basketball practice for Jason, and second of all, I am in charge of the Cub Scouts for the Christmas parade this Friday night. We are partnering with Hull's Drive In (whose Board I was recently elected onto, so this knocks out two organizational responsibilities at once), and Orrison's Tree Service, a business owned by the father of one of the cub scouts in our den. Here's the deal:

Some Cub Scouts will lead the way with our Pack banners and flags. Then comes the Tree Service truck, on the back of which will be a movie screen and projector (and generator) showing a Christmas movie (Charlie Brown, I believe). Then come the Cub Scouts, in cardboard cars, eating popcorn and watching the movie. And bringing up the rear, a Hull's Drive In banner which reads "Follow Us to Hull's Drive In."

The good news is that it is the first time I've been excited about the Christmas parade. The bad news is that I'm in charge of making the cardboard cars. I made my prototype last night (and of course forgot to take a photo), and now I have only 13 more to make by Friday. Ha! At least I don't have to decorate them - that will be the kids' responsibility while we are lining up for the parade on Friday.

But on a sewing front, I have finished 3 of the 4 twelve inch blocks to be framed. (yup, another goal not met; it seems to be starting to be a habit!) I don't really want to show the fronts until I have them framed and ready to go, but here are the backs. First, my favorite so far, probably because there is so much stitching to see: 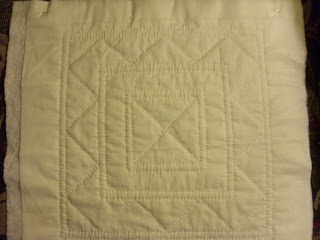 In comparison, this one seems to need something more, don't you think? 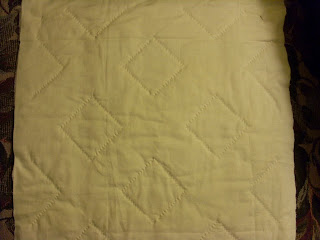 This one, too. Hmmm, if I find myself with a little extra time before they get wrapped, I might just put a few more stitches in. 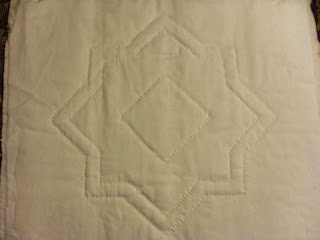 That's it! Have a wonderful Tuesday!
Posted by Vesuviusmama at 5:17 AM 6 comments: