I just got out of a meeting, and logged onto Facebook to peek at what others are doing before I jumped into what needs attention on my desk.  Usually, I see who is on vacation, who is slammed with work, whose kids said something funny - you know, typical Facebook stuff.

Lately, I've been the one posting "slammed at work" type stuff.  You know when you get to the point where you are doing so much and not sure you are doing any of it well?  That's been me lately, and it has come across in my Facebook statuses.

When I logged on just now, my stepfather had commented on one of my posts:

I sit here and reflect on a major life journey I embarked on.  It began with meeting a tiny bare foot girl,riding bareback on a pony,in the Maine woods on a dirt road at a residence called the Funny Farm. She rode up to me looked me in the eye with an incredible grin and engaged me in a very mature conversation.  I left that day wondering who this amazing child was and wishing I would get the chance to know her better.  For whatever reason the Creator granted me that wish.  A short time later the little girl her three siblings and their mother became my family. I watched this little girl turn into a teenager and do great things in high school. Then into a beautiful young woman, I drove her to Harvard University and lugged her trunk up several flights of stairs in her dorm.  I drove back home with tears of pride.  I went with her to pick up her first motorcycle then watched her climb on it with a teddybear and leave for Calafornia by herself.  Again I watched her go with tears of pride because I had done the same thing.  She made it but turned around and drove back to Maine.  When she got back we asked why she didn't stay she replied "Because people in Calafornia are insane". Then for several years I watched her relationship with a young man that she was fiercely in love with.  There were ups and downs and a few times the Atlantic Ocean seperated them.  A few times I was tempted to go visit the young man and smack him upside his head for making her sad and cry.  I forced myself to stay out of it,then one day she told us he had proposed marriage.  At the wedding I watched the proud young man break down and shed tears of pride while he was voiceing his marriage vows to her.  Then I understood why she had stuck by him, I walked away and stopped where I could observe the two of them at a distance and again shed tears of pride.

Tell me you wouldn't have cried, too. 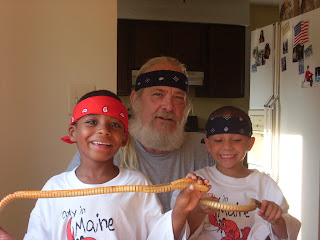 I love you, Mike Buxton.
Posted by Vesuviusmama at 8:04 AM 14 comments: