For some reason, I seem to always either be in over-drive, running from one activity to another with no time to sit still, or I'm as lazy as they come, getting nothing done. There doesn't seem to be much middle ground. That's how last week was.

BUSY!!! - Monday, even though I was home sick, I ended up having to go to Cub Scouts that evening because my co-leader had a confirmed case of strep throat and someone needed to be in charge, especially since we had a special guest, an astronomer from the university to teach us all kinds of wonderful things for our Astronomy Belt Loop and Pin. I made it through the evening, and actually felt well enough for work on

BUSY!!! - Tuesday, which is good because I had to run a Phone-a-thon to scholarship winners that evening until 10 PM - LONG day!

BUSY!!! - No rest on Wednesday because we had to go to karate. Our Pre-black belt class is NO JOKE - they have never worked us so hard in the two years we've been going there. They have definitely turned it up a notch or two for us.

LAZY!!! - Then Thursday hit, and I couldn't find the energy to do ANYTHING after work. I grabbed Donald's quilt and worked on his binding a bit while watching the beginning of Season 2 of MONARCH OF THE GLEN in our theater room; eventually, it was just me watching with his quilt on my lap - not much progress.

LAZY!!! - Friday was much of the same - I came home and read until bedtime, with a brief break for dinner.

BUSY!!! - Then Saturday, it was back to the other extreme - I woke up and was off and running

3) went to an auction for about an hour - I LOVE auctions! No good finds this time. There were some quilts, but nothing I just had to have.

5) planetarium with the cub scouts

6) bowling with the cub scouts

7) took Jason and Donald to get their ears pierced (they had a personal hygiene challenge to overcome before I would let them do this - a month straight of showers EVERY DAY. They made it seem easy, and now my reluctant bather is wanting 1/2 hour showers every night - I've created a monster!)

8) volunteering at the Drive In Movies

Whew! Up before 6 AM and not in bed until 1:30 AM! I thought maybe I'd sleep in on Sunday, but nope. But Sunday there was finally a little bit of balance - a little bit of housework, but also some time on the porch with a quilt and a book, and some time sewing a bit on Jason's quilt - 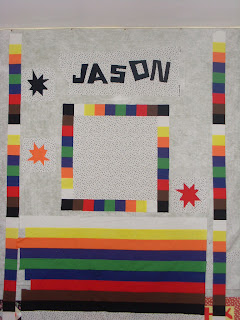 no design yet, but I keep making different elements to throw in there and eventually I'm sure it will come together.

Today after work, I was determined to blog (thanks to those of you who've been checking in on me!) and maybe sew a star or two, but then I'm taking the kids to the skatepark before karate class because it is a BEAUTIFUL day! I hope it is beautiful in your part of the world, too!
Posted by Vesuviusmama at 1:10 PM 6 comments: