First of all, I have to tell you all that I have finally joined the ranks of people who have cameras on their cell phones. I'm late to the party, I know, but how exciting to be able to take photos anytime without carrying along extra equipment! So, of course, while I was in New Haven this weekend presenting at a conference at Yale, I had to snap some photos.

Saturday's conference was LONG and I had some down time in between presentations, so I escaped outside to get some iced coffee from Dunkin Donuts and catch up on blogs on my iPad (still love it!!!) on a bench in a courtyard. I glanced up at this gaggle of students, and do you see what I see? 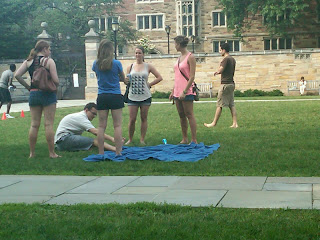 Lots of blue Half Square Triangles on that girl's white tank top! (Unfortunately, I don't think my camera has a zoom and I didn't want to get right in her face to take the photo, so you may have to click the photo to make it larger and see the scrappy HSTs.)

The conference went too late on Saturday for me to fly home that night, so I booked my flight home for 6:15 AM on Sunday so I could be with my family for Father's Day. At least, I THOUGHT I did. It turns out, I booked a 6:15 PM flight, and wouldn't get home until after midnight. Yup, I'm an idiot. Not only was I missing all of Father's Day, but I was in New Haven on a Sunday with no car and nothing to do. I asked for late checkout at the hotel, but that only took me until 1 PM. What to do with the next 5 hours?

I decided to WALK to the airport. I noticed on the taxi drive from the airport on Friday that it was in a residential area, and Google Maps told me that it was only about 4.5 miles away, so I strapped my backpack on my back (I travel light!) and set off, looking for adventure.

It started out great. I enjoyed walking through Yale's campus, and through the retail district that surrounds any group of youngsters in possession of their parents' credit cards, and found this shop where I just had to stop and browse. 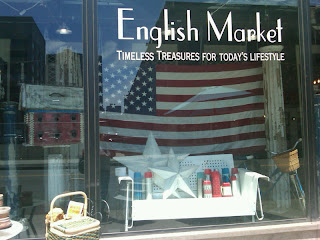 Check out the neat little sewing machine in a case: 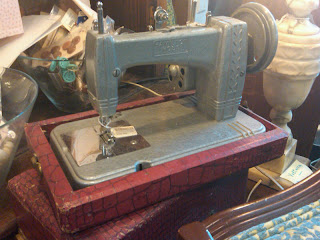 And these feedsacks that I forced myself not to buy. 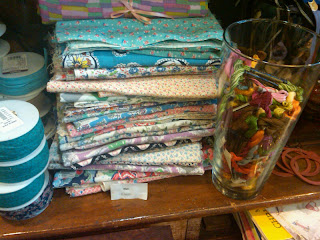 There was also a TON of beautiful embroidery floss along one wall, but I didn't buy that either since I have more than I will probably ever use already.

Once I'd checked out every cool thing in there, I was on my way again. Things were pretty dull for the next 2 miles or so until I came across a Dunkin Donuts, where I stopped for a frozen lemonade and a Boston Kreme. Yum!

At this point, I was starting to rethink my decision to walk, since I only had flip flops and heels (I opted for the flip flops) and my feet were getting not only tired, but filthy. But I soldiered on, and arrived at the airport a mere 2.5 hours before my flight. If you ever need to go to the New Haven, CT airport, BRING A BOOK! And a snack! It is the smallest airport I have ever seen, which, of course, means no refreshments besides a do-it-yourself coffee dispenser and a Coke machine, and absolutely nothing to do. People watching isn't much fun when you are the only person in sight.

Anyway, I got home safe and sound and now I'm back at work counting the minutes until vacation, which starts at precisely 3:00 PM on Wednesday afternoon, and not a second later!
Posted by Vesuviusmama at 10:05 AM 13 comments: