After the skunk madness of Thursday night, it was nice to take the kids and the (still slightly smelly) dog to my mom's house Friday night. Adam was in Philly with his team for the weekend (they won both games and are now 3-0; GO GENERALS!!!) so I thought a visit with my mother was in order. Mostly, we just ate and played Bananagrams while the kids played. 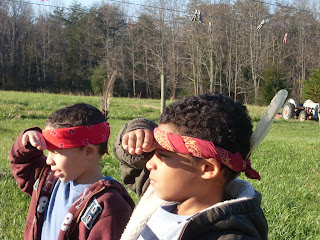 After we left her place on Saturday, life was pretty hectic while I

When I finally got home, it was 6 PM and I was tired, but I had the house to myself and there was NO WAY I was going to waste it sleeping. I brewed a pot of coffee and then settled down with my GGG quilt to do some hand quilting while watching MEET THE FOCKERS on TV. I ended the evening by running a bubble bath, lighting some candles and sinking into the tub with my current book, one of the Coffeehouse Mystery series by Cleo Coyle.


This morning, the kids didn't get delivered home until 11:00 AM, so I slept late (8:30!!!) and then hit the sewing room to work on Donald's quilt. I'm trying to not work on it while he is with me because I do want it to be a surprise, but it is hard when he seeks me out to play where I am. This is what is currently gracing my sewing room floor. 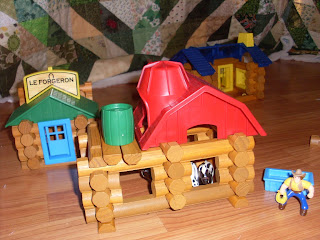 It was a wonderful day. The kids came back in great moods, made even greater when they saw the Air Hockey table. (Yeah, we STILL haven't finished painting our basement; what of it?) 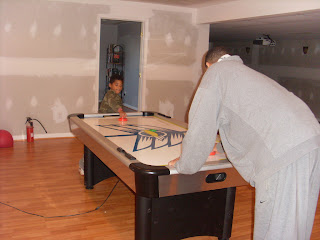 I sewed, I took a nap, I snacked, I read, I claimed the title QUEEN of the Air Hockey table. Now I'm planning to head into the living room to get some more done on my GGG quilt while watching another movie. But first, here are some things I got accomplished in the sewing room today:
I made another 12.5" block from the GGG scraps to be quilted and framed 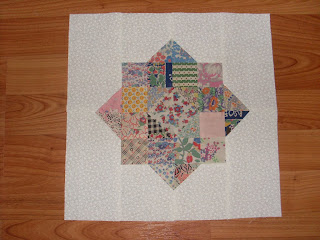 I finished the rows of Donald's quilt. Now I just have to sew those together and sew on the borders. I had planned to do an inner border of the white in the blocks, but I ran out. I'm hoping to find another white in my stash that is close enough to not be noticeable except right up close. (By the way, did everyone except ME realize that what I was making was a Disappearing 9-patch, except I didn't make it the D-9 way, but rather cut and measured every single piece separately? What a ninny!) 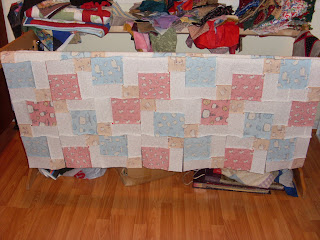 (They are hanging backwards - that's why they look like pastels here)

I made two 12.5" houses to play along with Beth at Love Laugh Quilt and her Friendly Neighborhood Quilt Game. 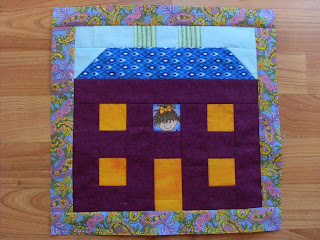 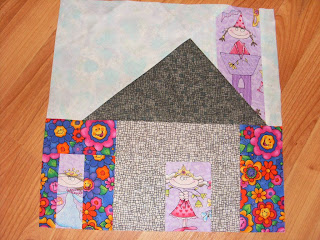 The first is one of the blocks I made to send to V at BumbleBeans, and then forgot. I just had to add borders to make it 12.5". The second was inspired by Em, who always has the most fun wonky houses. I'm just not feeling it - how do hers turn out so cool and mine turn out so weird? It was supposed to be a castle with three princesses. Oh well. I have until Jan 1 to make as many houses as I want. Are you going to play along, too?
Posted by Vesuviusmama at 5:50 PM 8 comments: