A strip here, a strip there

This week I mostly worked on my Carpenter's Wheel quilt blocks at the shop.  This Sunday and Monday, I finally made it down to my sewing room at home, and knocked out a couple more Strippy Scrappy Flippy Happy blocks.
The project would go by MUCH faster if I weren't cutting scraps into squares as I go, but my self-imposed deadline to have my scraps under control is fast approaching and despite all the precut squares I've added to my bins, it doesn't look like I've made even the tiniest dent in my scrap bins.

I'm linking up to Oh Scrap!  She's planning a Quilty Orphan Adoption event for later this month.  I'll be participating FOR SURE!  My orphan block drawer is OVERFLOWING!
Posted by Vesuviusmama at 7:13 PM 5 comments:

I was a Westering Woman!!

The second block of Barbara Brackman's Westering Women BOM was released yesterday, so, of course, I made it today.  It was an easy block called Indian.  It seems strange for me to use such big blocks - the center piece is 6.5" square - as most of the quilts I make have much smaller pieces.  But hey, it went together quickly! 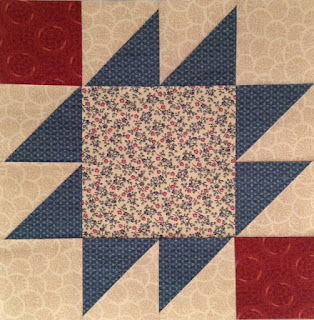 I was tickled by the accompanying blog post because it highlighted St. Joseph, Missouri as a "jumping off" point for wagon trains.  In the summer of 1993, I, too, traveled across country, albeit on a motorcycle and not a wagon, and I, too, stopped in St. Joseph, MO.  I left my home in the woods of Maine, and zigzag-ed my way across the country, stopping anywhere I knew somebody or found a youth hostel or cheap motel, and 20 days later arrived at my destination: San Francisco, CA.
St. Joseph wasn't a planned stop for me; I didn't know anyone there.  However, it is where I was when I didn't want to ride anymore that day.  I remember staying in an inexpensive motel and eating dinner at a restaurant with an Old West decor, all the way down to wagon wheels!  What really made St. Joseph stand out to me, though, was the fact that I accidentally left my rain gear in the hotel when I left, and I REALLY could have used it the day I drove through Salt Lake City, UT and stopped in West Wendover, NV to spend a stormy night in the WORST rundown deserted motel EVER - it didn't even have a radio or clock, let alone a TV, in the room! - and then the next day from West Wendover to Truckee, CA; it rained BUCKETS those two days and I had no gear to keep me dry.  I lived to tell the tale, though, which is more than can be said for many of those who headed west in days of old.

It has not been my most creative week.  I completed a lot of mundane tasks at work - pricing, orders, cleaning, a newsletter, class samples - but didn't have much time to either knit or sew.  When I got home from work today, after dinner, I MADE time to sew.  Two and a half hours later, I had two Mill Girls quilt blocks done, another Strippy Flippy Scrappy Happy, bringing that total up to 12 blocks, and a bunch of precut scraps.

How am I just now finding the Mill Girls quilt block?  I saw it a couple weeks ago and haven't been able to get it out of my head.  It is a perfect block for my scrappy style. 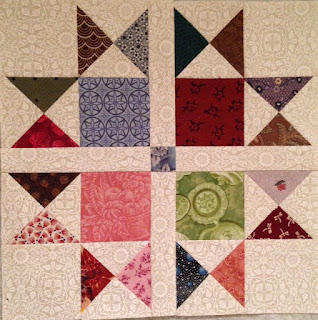 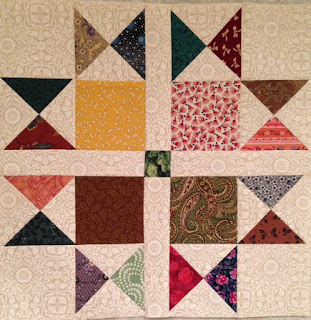 Does a quilt block ever speak to you like that, not letting you out of its grip until you make a block or two or twelve?

I'm linking up with Oh Scrap.

Posted by Vesuviusmama at 8:10 PM 8 comments:

Treadling the day away

One of the perks of having a shop on Main Street is that every time there is a parade in town, I have a front row seat.  This morning, the students at Washington & Lee put on a parade as part of their Mock Convention.  I arrived early, moved some merchandise out of the window, and pulled a seat up to my treadle machine to sew while I watched.
The parade was fun, but entirely too short.  When it was over, I didn't feel like doing shopkeeper things like pricing new yarn and placing orders, so I declared it a "sew day" and continued working on my Fading Charms quilt that I am making completely on my treadle from 2" squares.

Tomorrow, I should really work while at work, but we'll see - I may be in the window treadling away the day again.

Posted by Vesuviusmama at 6:02 PM 5 comments:

Can you tell I love COLOR??

I'm attempting Aunt Marti's 2016 UFO Challenge, finishing one UFO per month.  For me, finishing is getting it to the "flimsy/ready to be quilted" stage.  I managed a finish in January, but I'm really sweating about February.  She picked #9 as the one we finish, and for me, that is my color quilt that I started (and then stalled out on) back in 2010. 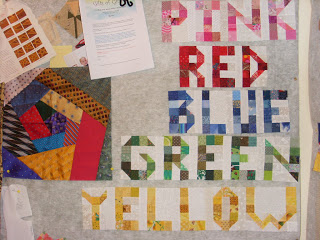 I figure I have at least 4 more colors to add - orange, purple, black and brown (and possibly gray) - and then all the setting and whatnot.  This quilt started because my 1.5" precut bin was overflowing.  I have since moved to a larger bin and it is, yet again, overflowing.  Might as well chip away at it.

Yesterday, I added ORANGE to the pile of completed colors.  Wish me luck getting these other colors done in time.  You may notice that I already did the short colors (red, blue, pink).  Sigh.

I will admit to being a tad bit distracted from sewing by my latest knitting project, a simple project called the Lollipop Shawl by Frankie Brown.  I got a new sport weight sock yarn in the shop whose color way reminded me of the sample in the pattern, and I couldn't wait to cast on and give it a try.  It is simple, garter stitch with a stockinette ruffle at the bottom edge. 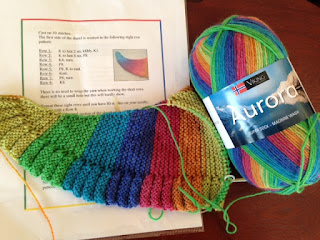 Erin
Posted by Vesuviusmama at 8:23 AM 13 comments:

Another day in paradise (aka the sewing room)

What a difference having an organized sewing room makes!  I've been down there more this past month than the past year combined!!  Today, I worked on my February Block Lotto blocks, Snails Trails,
as well as a house block for the 2016 Neighborhood Block Party.
And then, of course, I've been cutting and cutting and cutting my scraps.  I swear, it doesn't seem like the scrap pile is getting any smaller, even though my precut bins are filling up.  I've got 7 weeks to get my scraps under control and then whatever is left untamed must go!
Posted by Vesuviusmama at 7:21 PM 4 comments: