Can we rewind to the weekend, please?

I could tell it was a Monday morning without even looking at a calendar. I took the dogs to the vet this morning for check-ups and Rosabelle vomited in the car. While washing it out at a gas station, I was wondering to myself if I was going to smell like vomit at the office all day when it occured to me that I forgot to put on deodorant this morning in my rush to get both kids and both dogs out of the house on time. Great, I am going to smell like vomit AND sweat today. Can we just rewind to my wonderful weekend, please?

Hurricane Irene brought us some wind and rain, but nothing we couldn't handle. More importantly, she brought us BEAUTIFUL post-hurricane weather! No humidity and temps in the low 80s during the day and low 60s at night - and it is supposed to be like this all week! I'm in heaven! (in case you didn't know, "almost heaven" is in West Virginia, "heaven" is in Virginia)

Saturday was busy with quite a bit of running around and volunteering accompanied by the blustery weather, but Sunday was wonderful and relaxing. I didn't even shower and dress until right before bedtime when I put on clean pajamas! It was Jason's 9th birthday, so I made him some banana bread for breakfast, we opened gifts, and we lounged about for most of the day. For me, lounging includes sewing. I made a pillowcase dress/nightgown for Anika from a 50 cent pillowcase she helped me pick out at the thrift store this summer. I am much happier with my stitches and construction with this one than with the first one I made a couple months ago. 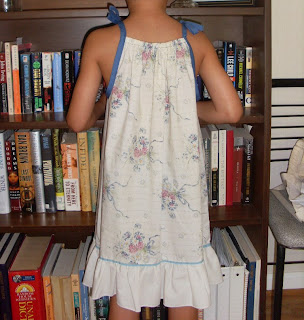 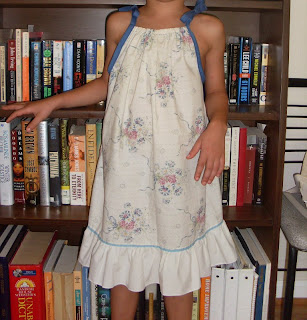 (note: this is a child-sized headless mannequin, NOT my 6 year old son. What kind of mother would ask her son to model a dress for his cousin!?! Although most 6-year-olds will do almost anything for chocolate...) I'll be sending this off to her once I whip up the other pillowcase that we bought into a nightgown. I would have done them at the same time but the other one needed a different thread color, and there is a limit to how many times I am willing to change the thread in a single day.

I also started working on a Christmas present for my niece - a patchwork circle skirt. The tutorial can be found at http://indietutes.blogspot.com/2007/05/patchwork-circle-skirt.html. I love the dresses in the tutorial, but wow, I had no idea how challenging it is to "gather". Each successive row has 1.5 times the number of patches, and you somehow have to sew them together. The first two rows were a struggle, but I powered through. When it came time to add the third row, I thought, "No way is this going to work!" 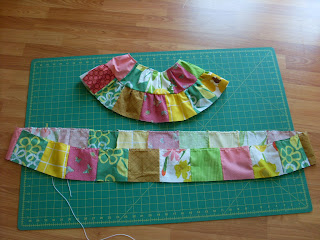 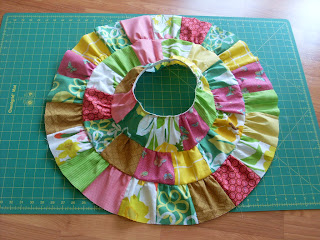 I was hoping that 3 rows would be enough, so I tried the skirt on my "child-sized headless mannequin" (no photo), but realized that if I didn't add another row, my niece would be getting a lot of unwanted attention everytime she bent over. The 4th row of blocks is over 10.5 feet long! 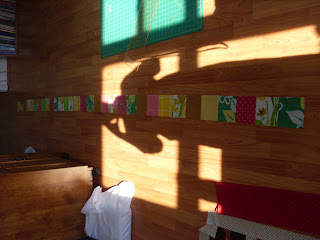 I called it a day once I got the blocks sewn together and a binding sewn onto the bottom of the row - I won't be attempting to "gather" that row until I have been fortified by a good night's sleep, a cup of coffee and a soothing fragrant candle. All I have left is to sew on the 4th row and sew on a waistband. (I have elastic in there now, but I'm in the process of taking that out because I thought of a better way to do the waist, I think.)


I would love to make one of these for myself - how fun would it be to flounce around in one of those? - , but the effort might just put me over the edge and into the looney bin. Maybe if I used rectangles instead of squares so I wouldn't need so many rows... (not that my legs are that long to begin with) It bears considering, and wow, what a stashbusting project!


To calm my nerves after all the "gathering", I started watching McLeod's Daughters on Netflix. I have found my new Netflix addiction! First, it was Gilmore Girls, then Brothers and Sisters, now, I can't wait to see what happens next on that beautiful spread in South Australia. And there are 100 episodes - woo hoo! I'm only on number 5, so lots of viewing pleasure ahead of me. I was watching on my big 110" screen in our home movie theater (which still isn't painted, by the way - wasn't that my grand plan for my summer vacation?), and the scenery was BREATHTAKING! Was that filmed anywhere near where any of my Australian friends/followers live? If so, prepare a room; I'm coming to visit!