While my Bee Block for Kate this month was born out of my inability to calculate yardage needed for a block and my aversion to wasting any scrap of fabric, I fell in love with the block I created. 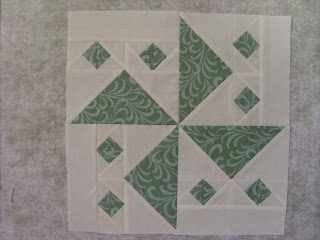 Perhaps this block isn't my creation. Perhaps it has a name and a pattern and all that already, but until I learn differently, I'm claiming it as my own and naming it the Pindrop block because of the pinwheel combined with what look to me like gumdrops. (I know in reality, they look more like diamonds than gumdrops, but I have a MAJOR sweet tooth and we haven't had a single sweet thing in my house for eons and I DREAM about candy...)

Anyway, since some of you liked my block and one person even asked for a tutorial, and because I wanted to make it again ON PURPOSE this time, I rushed down to the sewing room with my camera as soon as my kids were tucked in to recreate the block and document the process.

Um, wow! It sure does take a lot longer to make a block when you are stopping to take photos and write directions every step of the way. And getting all those photos online in the correct order is a form of TORTURE, but it's worth it. I love my new Pindrop block even more than my first! You know me, scrappiness makes my heart SING! 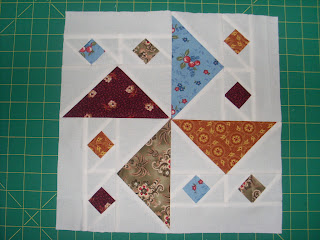 Keep reading if you want to see how I did it. If you'd rather watch paint dry or clip your lawn with fingernail clippers, I understand, and I won't take it personally. 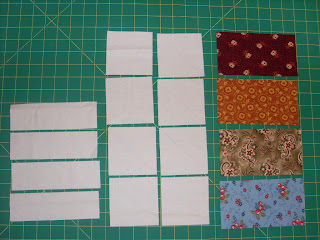 (Here we have the 2X6 rectangles, the 3.5" squares and the 3.5X6.5" rectangles. Hmmm, something's missing...Oh, yeah, those 2.5" squares. Off to a pretty inauspicious start, forgetting things already! Here they are below.) 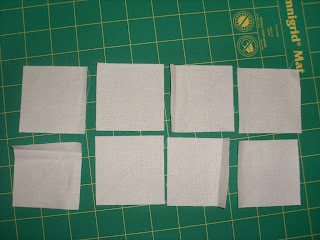 It is hard to tell in the photos, but I have drawn a diagonal across the back of each of my 2.5" and 3.5" background squares. This isn't necessary, but just like my mind wanders, so does my line of stitches, so I nearly always draw lines to keep me on track. OK, let's get going!

Piecing Instructions:
Step One: Line a 3.5" square up with one end of each 3.5"x6.5" rectangle and sew ON THE LINE (or just eyeball the diagonal if you didn't draw lines). I always start in the middle of the block (see below) rather than on the corner so my fabric doesn't get stuck in my feed dogs. 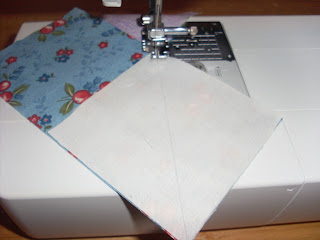 Step Two: Once all four are sewn together, cut off the outside corner 1/4" from the sewn line. Keep the bonus triangles together as they are and take them over to the sewing machine. 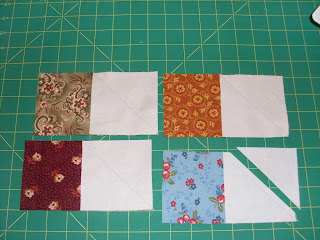 Step Three: Sew the bonus triangles together as shown. 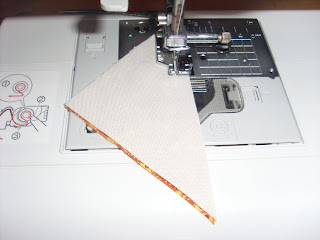 Step Four: Press the bonus Half Square Triangle blocks (HST) that your bonus triangles made toward the darker fabric, and trim to 2.5" squares. 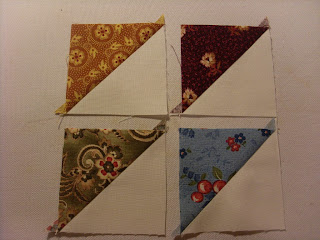 When trimming HSTs, I use a ruler with a diagonal line, and stack two HST blocks facing each other with their diagonals couched/nestled to cut two at a time and speed things along. 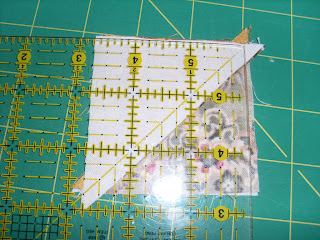 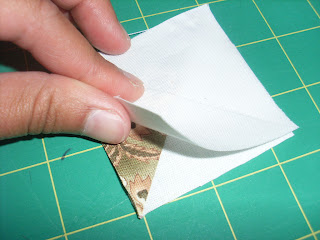 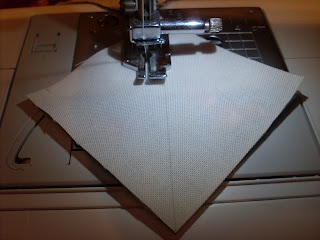 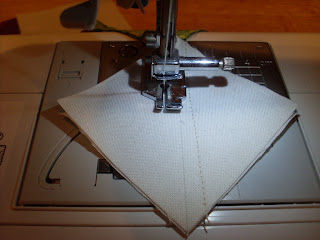 Step Six: Set those aside and go back to the 3.5"x6.5" rectangles. First, press towards the background fabric, 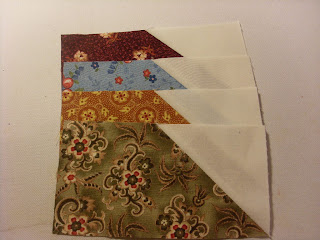 and then, line up another 3.5" square on the opposite corner, making sure that the diagonal meets the other background square at the top or peak. Sew ON THE LINE. 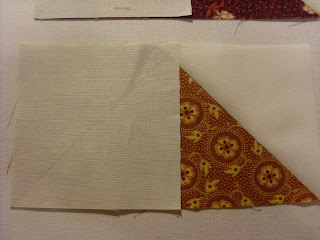 Step Seven: Head over to your cutting table with the last 8 blocks you've sewn. For the HST blocks, cut them apart ON THE DRAWN LINE. For the pinwheel blocks, cut the bonus triangles off 1/4" from the sewn line again, and take those bonus triangles back over to the machine to complete Steps 3, 4 and 5 with them. Then bring them back to the cutting table to cut them apart ON THE DRAWN LINE. 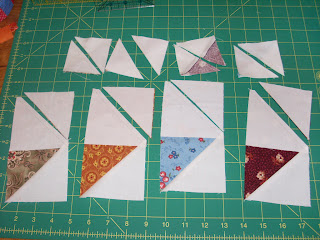 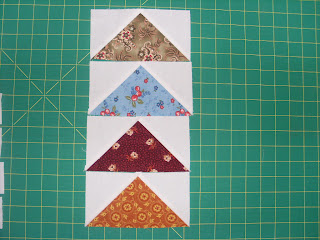 Also press open your HST blocks that were sewn to the 2.5" squares. There should be 16 of the little suckers. 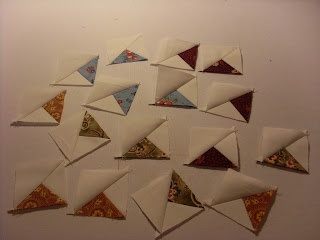 Trim all the squares down to 2" squares. When doing this, I use the ruler with a diagonal line again, and place the diagonal of the ruler on the diagonal of the block, and make sure that the point of the triangle is at the intersection of the 1" marks on the ruler. (Nice going, Erin, use your ruler upside down so your 1" mark is actually a 5" mark. Can you tell I've never done a tutorial before?) 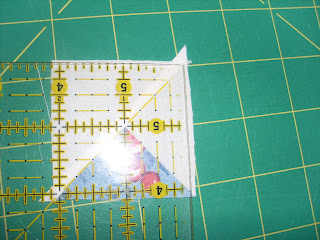 Step Nine: Now you are going to make the gumdrops. Take two of the 2" squares and line up the colored triangles. When doing this, choose two squares where the edges of the triangles will couch/nestle with each other to ensure better points on your gumdrops. I usually pin at this point. 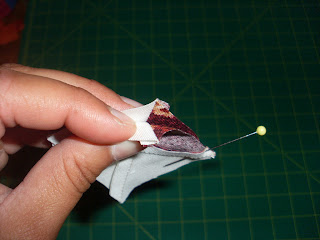 Note that if you don't line the two halves of the gumdrop lined up as illustrated above, it isn't the end of the world. Look at the photo below - the gumdrops on the left would couch/nestle when sewn together, those on the right would have a much bulkier seam at the top end than at the bottom, and the points would be less likely to match. Either way is fine, but pick a way and stick with it for ALL of the gumdrops. Once they are sewn together, I recommend pressing these seams OPEN. 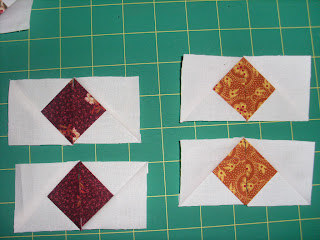 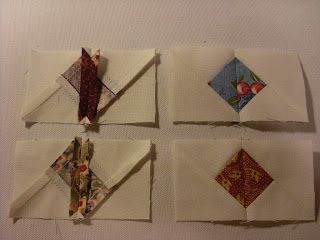 Step Ten: If you are making a scrappy block like mine, now it is time to experiment. Do you want all the gumdrops to be in the same quadrant as the pinwheel blade of the same fabric? 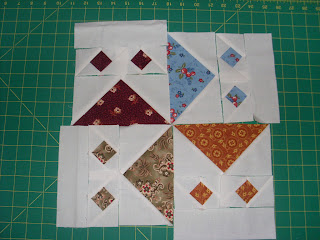 Or do you want them to be scattered about in a scrappier mannner? 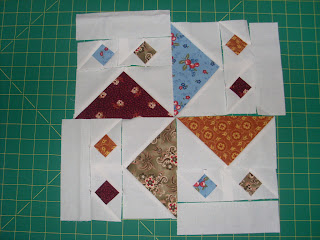 (You KNOW which I chose!)


Once you decide (or if you are making the block with just two fabrics), sew two gumdrops together end to end, and press the center seam to one side.


Step Eleven: Line up each 2-gumdrops unit with the point of the corresponding pinwheel blade/flying geese, and sew. Again, this is a point where I would pin. Once sewn, press away from the gumdrops. 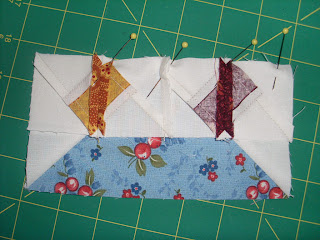 Step Twleve: Sew those lonely, nearly forgotten 2x6" rectangles of background fabric to the outside edge of the gumdrops. Press away from the gumdrops. 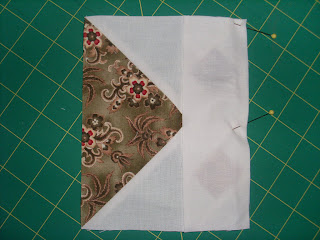 Step Thirteen: Sew the four quadrants together and press. Here's a close-up of the back of one quadrant to show you all the pressing directions. 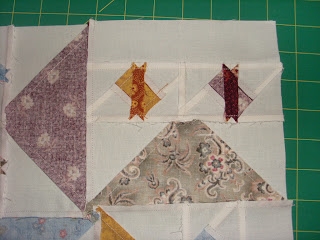 And here's my finished block, all squared up and ready to play!

If you make any blocks, I'd love to see them! Thanks for taking an interest in what I love to do!
Posted by Vesuviusmama at 9:25 PM 16 comments: