The Art of Making Do

There's been a lot going on at Casa de Hutchinson! Thanksgiving was fantastic! (Of course! Any holiday with that much food is great in my book!) But since Adam had to work on Friday afternoon, we were back home by 1 PM on Friday. I spent the afternoon putting together a captain's bed that I bought for Donald. Lots and lots and lots of screws, but I did it! He likes it and I like it, so everyone is happy. But in addition to the big box holding the bed parts, there was another box waiting for me - my long-lost string quilt, Calling All Strings (because it was foundation pieced on phone book pages) that I sent to the long-arm quilter's in February.

Granted, the wait time was horrendous, but there were extenuating circumstances, so I'm not mad. And she did a lovely job!

Originally, I had planned to give this to my father-in-law for his birthday last March, but obviously, that couldn't happen. Instead, I think I'm going to give it to my brother for Christmas. He mentioned earlier this year that everyone had a quilt from me except him, and he's right! Well, except for me and Donald.

I'm going to have to wait, but hopefully, Donald's will be ready by Christmas, too! I finished piecing the top this weekend, and here it is on his captain's bed that I put together.

It isn't very wide by design - I didn't want the quilt to get in the way of opening and closing the storage drawers under the bed. I meant for it to be longer, but I ran out of fabric. So much so that I had to cobble stuff together. There are three of these patched together white pieces, 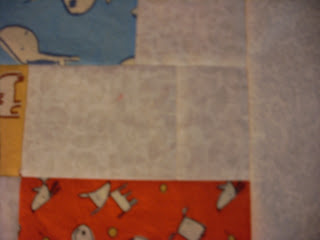 and about 5 of 6 of these cobbled together red and blue blocks (the blocks are supposed to be 5" square, but for some I had to combine two fabrics to make 5"). 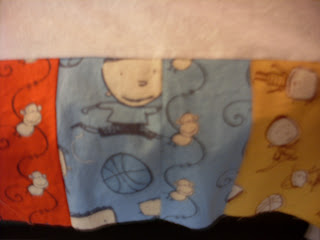 And, of course, I already mentioned that the inner white border is not the same white as the white in the blocks, because I ran out of that, too. I've already shared before that Roberta Horton's Scrap Quilts: The Art of Making Do was my primary source of inspiration when I first started quilting, so "make do" is what I did. You can't really tell from a distance. Besides, it is not meant to be an heirloom, but rather a utility quilt, made with love.

In fact, all that is left of those 9 fat quarters are these few scraps. There goes my idea of making a matching pillow sham. I'll just cut these down to useable squares and add them to my scrap squares tins. 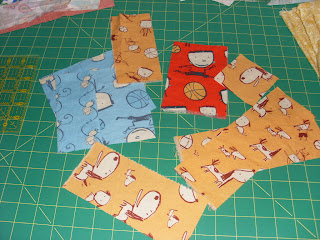 And you know I couldn't resist cutting into some of my other new fabric, right? I decided to join the ranks of those who are making mug rugs for themselves and others. This one is for ME!

Hand quilted in the ditch.

It is on my desk at work right now, which reminds me, my coffee cup is empty.
But before I dash off to the coffee machine, I just have to brag on my hubby a bit - his team has started the season undefeated, 4-0, their best start to date! On Saturday's game, my brother and his girlfriend came over (the guy waving and the woman next to him), along with her two children (who are also waving) and my two children (who are making faces, OF COURSE!), and my cousin and his wife (in front of my brother). I LOVE MY FAMILY!!! 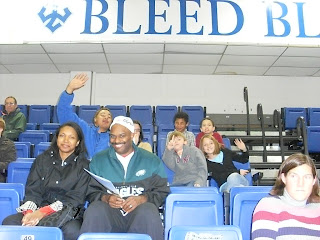 Posted by Vesuviusmama at 5:17 AM 9 comments: