I love the word BALM. To me, it is calm and soothing and quiet and restorative, and that's just what I was seeking in my sewing room today as I escaped the chaos that is my life. I don't want to bore you with the whiny details, but this snippet should sum things up:

-the plumber as he is trying to fix a leak in my basement outside my sewing room, "CRAP!! Um, do you have any towels?"

I'll work on my Bee blocks, I said to myself. Both April and May's fabrics arrived within a week of each other, so I had two blocks to make. I started with May. We could make any block we wanted, and the fun fabrics included a monkey that was screaming out to be the focus, so I made an EXTREMELY modified Weathervane block. I like the way it turned out, but believe me, the modifications weren't intentional but rather the result of poor planning on my part and some premature cutting. 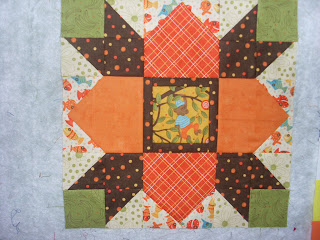 Fun, but not really an experience that served as a balm. On to April. These fabrics are much cooler - Kona Snow and three green/grays. The request was for a pinwheel-type block. The first thing that came to mind was a Dutchman's Puzzle, and I cut, and started sewing before I realized I didn't have enough Kona Snow to make that. Hmmmm.... How about I use those bonus triangles, too? That should give me enough! Nice try, Erin. Close, but no cigar. (Where does that expression come from anyway? I use it, but it makes no sense to me!) So, here I sit, two 2.5" squares of Kona Snow short of finishing her block. The frustration of that didn't really soothe my nerves either. 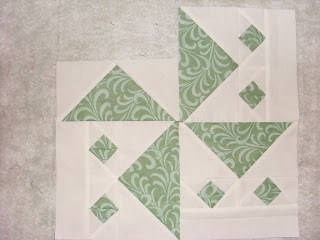 Finally, as a leader and ender, I sewed together some 2.5" scraps to play with one of my setting ideas for my Birdie BOM (yes, I still only have 2 blocks done, but I'm hoping to finish block 3 on the plane ride to and from California this weekend). 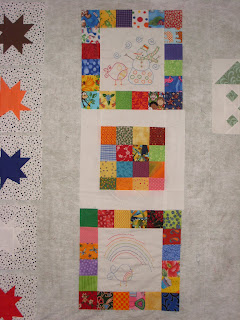 Not sure about this setting - it is hard to tell how it will look with so few blocks.

Anyway, I know that part of my agitation is from going away. With all the travel I do, you'd think I'd be better at it, but ALWAYS, the night before I leave, I am a basketcase, trying to get everything done, making lists and checking them twice. Is this normal? Does everyone have pre-trip jitters?
Posted by Vesuviusmama at 7:33 PM 6 comments: