Sometimes, I find that I do so much that I don't do anything well. Today, I was convinced that I was a failure as a mom. My 5 year old has been talking for weeks about his concert/play at school. It's been on the calendar. We changed other plans so we could go see it. It was tonight at 6:30. Or so I thought.

We arrived at 6:20 PM, just as it was ending; apparently, it started at 6:00. When we walked in the door to see the kids getting their final applause and I looked down at my little guy, all dressed up in his finery with a crestfallen look on his face, my heart broke. I held it together until another mom told me, "It's an honest mistake; it could have happened to anyone." But it didn't. Donald said, "Why did you make us late, Mom? No one else was late." and I couldn't help but cry as he walked off to find his teacher. I called my husband to tell him not to bother coming with Jason; we had missed it and it was my fault.

The other mom took pity on me, found the music teacher and got me the CD of music that the kids used so at least Donald could sing the songs to us at home, and we drove home. As I drove, feeling like the worst mom in the world, we came over the last hill before our house, and this is what we saw - 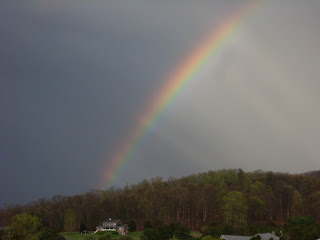 Little did I know. I walked into the house and noticed that the furniture was missing from the kitchen. When I got into the computer room, I saw why. When my 8-year-old, Jason, heard that we had missed the program, he recreated the stage and seating so Donald could perform it for us at home; he didn't want his brother to be sad for missing the program. I couldn't help but to cry once again - how did such a befuddled mother end up with such wonderful children? 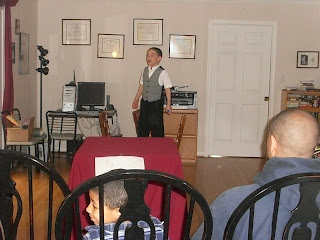 We put the CD in the player and Donald sang every song to us as I watched through a veil of tears, holding hands with his thoughtful big brother.
Posted by Vesuviusmama at 4:32 PM 17 comments: