I was feeling badly about my nearly picture-less post yesterday, so here we go.  First, Donald and I cutting wood for the chicken coop.  We couldn't find safety goggles, so we are wearing "cool dude" sunglasses, as my boys call them. 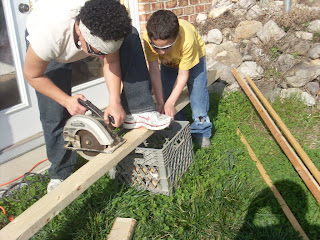 Then, my latest pillowcase aprons.  The one with the pockets is for me.  For some reason, these pillowcases just said "Spring" to me. 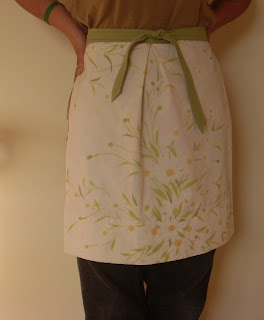 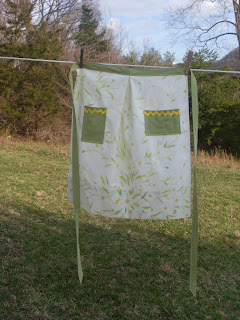 And finally, I put the last two borders on this quilt.  It is 39" square, and the vintage fabrics are super soft, so it seems like it would be perfect for a baby, but since all the fabrics (except the white background) are vintage from a salvaged quilt, they are also super fragile.  I'm guessing a baby isn't necessarily the best recipient.  Is 39" too small for a lap quilt?  What to do with this one?  I would have made it bigger, but I was trying to use up the last of that white fabric, and I did. 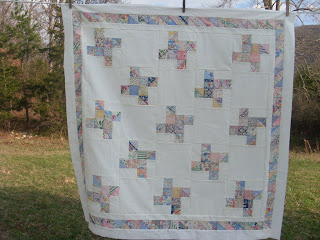 I just love looking at these vintage fabrics and trying to guess what they were used for (besides making a scrap quilt) - an apron? a shirt? a babies jumper? 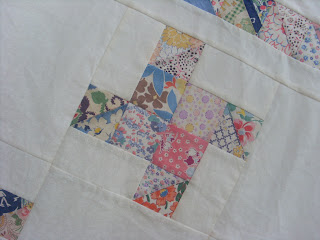 This weekend is my annual twin retreat with my sister.  We are headed to Columbia, SC to see the Zac Brown Band in concert.  Anyone from there or been there, with ideas for what else we should do?  I'm sure we'll find some thrift and antique stores to browse.  She is a knitter - any great quilt and/or yarn stores we shouldn't miss?  Any textile exhibits?  Great (and affordable) food?  Our schedule is wide open and we are open to suggestions.
Posted by Vesuviusmama at 9:25 AM 5 comments:

I've just been busy.  Unfortunately, I haven't been the kind of busy that produces pretty pictures.  I've been:

- playing basketball.  Yes, I am just 5 ft tall and no, I've never played basketball before, but I decided it was time the Hutchinson men cheered me on. So I put together an intramural basketball team of women faculty and staff, and we've been whupping up on the sorority girls half our age.  What fun!  We are three games in and undefeated.  I've scored in every game, and last night I even hit a 3 pointer!  I didn't even realize I could throw the ball that far!

- building a chicken tractor.  Have you ever heard that term before?  It is basically a moveable chicken coop.  My kids have been begging for chickens for over a year, and I'm partial to free range eggs, so this weekend I sketched out a plan and we got started.  There are a ton of different types of chicken tractors out there, but the one I sketched out (based on my limited abilities and the materials I had on hand) looks most like this one: 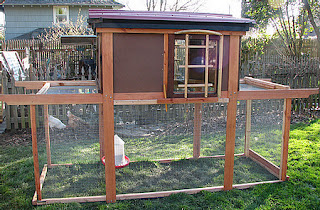 Hopefully we'll have half a dozen chicks by this time next week.

- reading.  Well, re-reading actually.  I had forgotten how much I love Earlene Fowler's Benni Harper mysteries.  I started at the beginning, and I'm on book 5, Dove in the Window, right now.  Oh how I wish there were a new book in that series on the horizon!

- quilting.  I'm still hand quilting the Charm baby quilt, but the progress is slow, as usual, and I don't want to bore you with more photos of the same old thing.  The same goes for the lap quilt made from bits of my Great Great Grandmother's salvaged quilt - I have just two borders left to sew on, but you've seen that quilt so many times already.

- mining the thrift stores.  I seriously have a problem passing up pretty pillowcases when I see them.  I bought 6 more this weekend, and made myself an apron to wear at the two fairs/events where I'll have a booth this year.  I finished at midnight last night, so no photos now, but when you've seen one apron made from upcycled pillowcases, you've seen them all, right?

- leading my Cub Scouts (of course!).  This weekend was the Pinewood Derby at our Pack Meeting.  We Tigers lead the opening using Sign Language we had learned to ask everyone to join us in the Pledge of Allegiance.  Then, those wonderful little Tigers of mine sat still and behaved throughout the whole Pinewood Derby, bringing the Den of the Month honors home to us for the month.  They are such good little doobies!

So, I haven't been idle, but I haven't been doing anything that really warranted sharing, either.  I need to do something exciting so I can put some eye candy up on here.
Posted by Vesuviusmama at 11:31 AM 6 comments:

Catching up with old friends

I survived our scholarship competition, a 3-day event that I organized for 165 high school students from around the world to experience my university and compete for scholarship packages worth a quarter million dollars each (yes, that's how much 4-years at a selective, private liberal arts school costs these days - yikes!). It is immensely rewarding for me when the competition comes together, but needless to say, I'm exhausted! All I can think of doing when I get home these last few days is rest.

So, I've been reconnecting with old friends, namely my THIMBLE, as I work on hand quilting the baby charm quilt, and BENNI HARPER, as I decided to read Earlene Fowler's books over again from the beginning. No fun photos for you, but know that YOU ALL are the next old friends I hope to catch up with; I haven't read anyone's blog in over a week. Thank goodness my job is cyclical in nature; if I were this busy all the time, I'd collapse in a useless heap.
Posted by Vesuviusmama at 3:44 PM 2 comments:

I don't know why I do this, but I always seem to cruise along making the blocks of a quilt and putting them together, but when it comes time to put on borders, I lose momentum. I love pieced borders, so that is probably why. After doing all that work making the center of a quilt, the work of making pieced borders is sometimes overwhelming. But with this little quilt, I really don't have an excuse. The pieces are already cut and just need to be sewn together and then sewn onto the quilt. What is taking me so long? 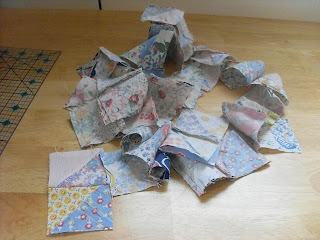 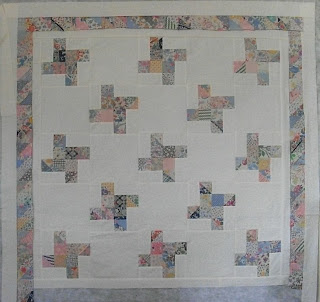 Part of the problem is my recent infatuation with making aprons from pillowcases.  My thrift store shopping spree last weekend yielded A LOT of pillowcases.  Last night I made 2 more.  First, this reversible children's full apron from a pillowcase and some green striped fabric that I had on hand. 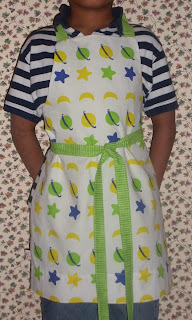 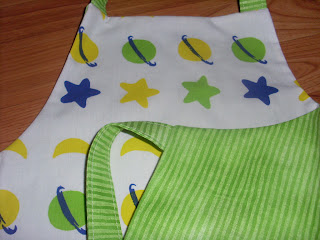 And then this half apron from a large cloth napkin that I found paired with the last bit of a Thimbleberries print..  I just LOVE the pom pom fringe at the bottom. 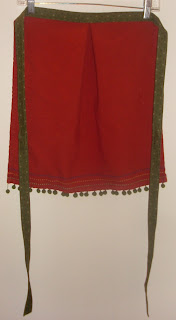 And lo and behold, I posted items in my Etsy shop last weekend, and had a sale in less than 12 hours.  Woo hoo!
Posted by Vesuviusmama at 6:01 AM 8 comments: