I was a Breech Baby

I have a feeling that explains a lot of things in my life. I seem to never do things things the "normal" way, or I do things backwards. Or, in the case of this weekend, inside out. Ugh.


No sewing on Saturday because I spent the day with my mom - wonderful! But that meant I just had Sunday to sandwich the Cub Scout quilt because we meet tonight to tie it. In my infinite wisdom, I decided I needed to "birth" this quilt, since I wouldn't have much time before this Saturday's ceremony to bind it, and I'd rather use that time preparing for Bonnie Hunter (I did tell you that Bonnie Hunter is coming this Friday and Saturday, right? And that I get to have dinner with her before Friday's trunk show? Oh, I am SO excited!!!)


Who cares that I've never birthed a quilt before. It can't be that hard, right? I laid out the quilt, pinned it and sewed around the edges. 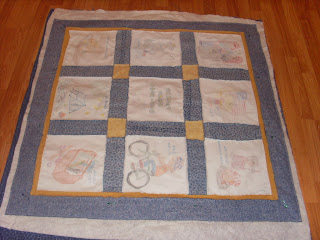 Then, I trimmed it down nice and neat, and started turning it "right side out". Hmmm, something isn't right - the batting is on the OUTSIDE!!! Out with the seam ripper. It took me half an hour to pin, sew and trim, and another hour and a half to rip out the seam.


So, two hours later, I was back where I started. When I was giving birth to my first son, they called that "failure to progress", and gave me a C-section. Apparently, I'm not much more facile with this birthing process. About half way through the seam ripping, I considered "an emergency C-section" of my own. What if, instead of WASTING all this TIME ripping seams, I just trimmed all the borders down by 1/4". Who cares if my borders aren't the same width as my sashing strips, right? I could avoid all this seam ripping and just sew around the new perimeter. I was tempted, but I didn't. While this quilt isn't going to be a masterpiece, I did want to do as nice a job as I could for the boys. I'm curious, though, would any of you gone ahead and cut it down instead of all that frogging?


I had hoped by now to be able to show my completed Birdie BOM block. I've been working on it at basketball games and practices for two weeks now, plus through a movie. I've discovered why it is called a Block of the Month - it is going to take me ALL MONTH to finish the darned block!


I eased some of my frustrations last night with some mindless pressing - all the bonus triangles from previous projects that I've been sewing together into HSTs as a leader/ender project these days. One day, there will be enough to make some crazy quilt that is a conglomeration of leftovers from lots of different quilts. 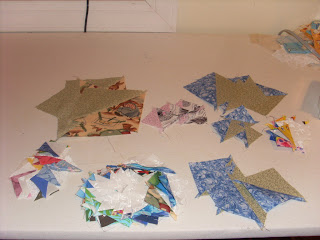