Even though my official move date was August 11, I am STILL unpacking.  This week, I found a baggie of bonus triangles.  What's a gal to do but start sewing them together!

After sewing them into HSTs, 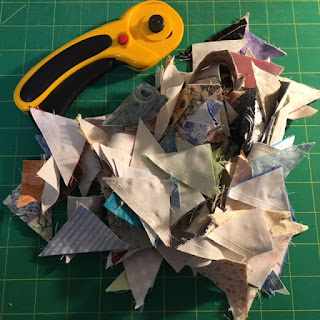 I trimmed them to size (1.75"), and started playing with layouts. 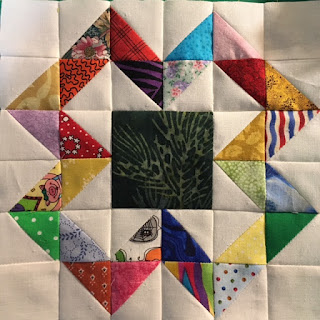 This little block took longer than I'd like to admit, and I didn't particularly like it as I was sewing it, but now that it is done, I think I like it.  I think I'd like it more on point with some fun alternate blocks in between, but I'll have to make a couple more first to play around with it.  There's not much time for sewing in my life right now, but a week from now, I'll be on Thanksgiving Break, and I plan to sew, Sew, SEW!!!

In the meantime, I'm linking up with Oh, Scrap and Monday Making.
Posted by Vesuviusmama at 7:48 PM 8 comments: