Another night with not a stitch of sewing done...pooh! But the good news is that my end-of-the-year office party went well at my house last night - about 30 people, lots of good food, Air Hockey, Bananagrams, and a new game that I've never played but will definitely buy now, SmartMouth.

Once all my guests left, I "remembered" that I had 3 overnight guests - my good friend (and co-Den Leader for Cub Scouts) had a birthday yesterday, so I started the day by taking her some homemade Apple Crisp and ended the day by picking her 3 kids up from school and bringing them home with me to spend the night with us. They are great kids, so it is a pleasure to have them stay over, but last night, when the last guest left and I called the kids in to get ready for bed, look what I saw: 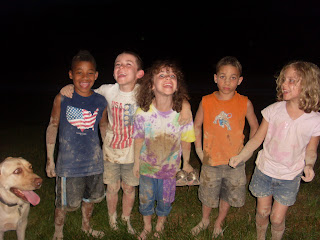 (they are all saying, "We're filthy!" except for Donald who is mad at me because I said he has to take a shower)

They had been making "adobe" to patch bricks. Oh, my! My sparkly clean pre-company bathrooms were completely transformed as we scrubbed the dirt away. And then, little did I know, there was the post-shower hair de-tangling routine for the girls. Holy macaroni! If I had girls, they'd be bald-headed because that was an ordeal! But, they all went to sleep very dutifully after story time, and I was asleep not long after.

Tonight, though, I'M SEWING!!! After school and a doctor's appointment, we are going to the pool to cool down (and soak off any dirt we may have missed last night!), and then I'm going home and sitting down and that's IT! After all the house cleaning this week in preparation for this gathering, my house is both cleaner and tidier than it has been in a long while, so I will feel no guilt about sitting on my behind for a few hours. Tomorrow, hand quilting photos of the Pick and Choose quilt, I promise! There will also be a new recipient for THE TRAVELING STASH. If you haven't put your name in the hat yet, there is still time!
Posted by Vesuviusmama at 6:13 AM 4 comments: