This morning, I was greeted with an email greeting card from the Human Resources Department here at work. "Happy W & L Anniversary!" Apparently, this is the 7th anniversary of my first day of work here. Seven years!?!
For some of you, that's small potatos. But let me give you a little background about myself. By the time I turned 18, I had moved 25 times. No, my family wasn't military, but different circumstances - illness in extended family, unemployment, poverty, racism (my father was Black, my mother is White), perceived greener pastures elsewhere - conspired to make my family very nomadic in nature. While I was born in Camden, New Jersey, I lived in Florida, North Carolina, Georgia, Washington, Oregon and mostly, Maine. I tell people I'm from Maine, when asked. Not only were many of our moves within that state, but my mom's family is also from there. That's where I lived all through middle school and high school, and it is where I went home to when I was in college.
Fast forward to the night before my twin sister, Ericka 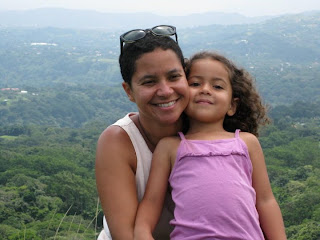 (here she is now with my beautiful niece), graduated from college. On that night, I laid eyes upon the most handsome and intriguing man I had ever seen. He was a classmate of my sister's and would be graduating with her the next morning. He approached my sister and asked, since they were friends, if she minded if he "talked" to me. Her response, "Sure, it's not like you'll ever see her again!" So that night, I spent some time getting to know this young man. I remember telling him about all the moving I had done growing up, and how, now that I was an adult and responsible for my own whereabouts, I was going to put down some roots, enough with all this wandering about.
Both my sister and I had to eat our words that night. I've been with that man for 17 years now, married for 10 of them. And he and I have moved 14 times; some roots, huh?
Until we got here, to beautiful, idyllic Lexington, Virginia. As my email this morning reminded me, I've been working at the same place for 7 years now, and living in the same house for 6 and a half of those years. Sounds like the beginnings of some roots, doesn't it?
Speaking of longevity (OK, bad segue), I worked on my Great-Great-Grandmother's quilt more last night (I confirmed with Mom last night that it was made by her Great-Grandmother). I have completed the blocks for the center section. It isn't as big as I would like it to be, but since this was obviously a scrap quilt when it was made, I wanted to continue with that "spirit" and only use fabrics that I had on hand to re-create it. As a scrap quilter, I don't have a lot of anything, so that limited what I could use for the new fabric in my alternate blocks here. It actually isn't muslin, but rather, a delicate pale beige floral print on an off-white background. It reads as solid unless you are up close. Anyway, I've used all of it. I love the way it looks so far, but how to make this quilt bigger?

I have 4 alternate blocks (the X shape) remaining. I have a fair amount of original fabric squares and HST remaining. My thought right now is to put one of those X blocks in each corner, and then fill in sides with original fabric squares and HSTs. That would make the resulting quilt about 48" square. Not as big as I'd like, but it may just have to do. Another thought is to frame the inside of the quilt with a 2" border of a darker, solid-reading fabric from my stash before adding that outside border with the X blocks and the original fabric. That gets me up to 52" square. It might also be a good idea to frame the whole thing with a fabric from my stash to add stability to the edges - I am worried about attaching a binding to these fragile fabrics. If I were to add a 6" border all around the aforementioned 2 borders, I'd have 64" square, big enough to cuddle under on the couch. But I don't know. These are just the ideas that came to me when I got to this stopping point last night. Any ideas, anyone? I don't want to overwhelm the original fabrics with too much new stock, and I don't want to buy anything, just use what is in my stash. Any ideas are more than welcome!
Posted by Vesuviusmama at 5:12 AM 9 comments: