Remember how I said there were some things I would do differently if I were to make those pocket potholders again?  I didn't want to forget, so I tried again.  I used an 8.5" block of pieced 1.5" scrap squares (that I already had made) for the front, a 8.5" block of "made" blue fabric for the back (that I had already made), some gold bias binding (leftover from the last potholders I made) and I piece of red binding (from my binding scraps bag, so already cut and pressed).  Gosh, it makes a project much quicker if you just use pieces you have already pieced for other projects!  All I did was quilt the top and the bottom, trim and bind. I made this potholder smaller - 8.25" compared to the 9.5" potholders I made previously.  The size works much better for my hand.  And instead of trying to attach the binding by machine, I did it by hand, and it looks so much nicer!  For some reason, I sewed onto the back and then finished by hand on the front, which is the opposite of how I usually do it, but it turned out fine anyway.


Now to make another one. I'm pretty sure potholders like to have a mate for life...

My birthday was fabulous from start to finish.  I had to rent a car for work this week, and look what they had on the lot... 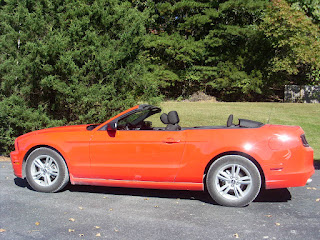 Yup, I rented it.  After all, it was my birthday!

I received a letter from the President of the University passing on some positive feedback he had received about me.  He wrote it two weeks prior, but I was out of the country, so I didn't receive it until my birthday, so it was like a present to me.

My kids bought me some Swedish Fish (one of my favorite candies), and wrote a sweet card that said, "All the years we've known you and you don't look any older!"  Ha!

I bought myself some new sneakers, and my hubby and I had a great workout together on the heavy bag with our new boxing gloves.

I received some flowers and chocolate from my mom and younger sister.
Everyone I know either called or emailed or Facebook'ed me.  I felt so LOVED!

The sun shone and birds sang.  It was just a FABULOUS DAY, and I felt like I was on top of the world!
So I decided to do a giveaway, but I don't quite have the whole prize together yet.  Stay tuned - there will be a giveaway later this week.  Until then, may your days be as wonderful as mine have been lately!
Posted by Vesuviusmama at 7:09 PM 9 comments: