On Friday morning, looking down the barrel of the weekend to come, I was unsure if I had the stamina to make it, but here it is Sunday night, and I am happy to report that I survived.  Adam and Jason went to Atlanta for the Division 3 Men's Basketball Championship (yay, Amherst College, national champs!), so it was just me and Donald at home.  I had to do something to make up for him being left behind with mom, right?

Friday night was stay at home and relax night to rest up for the weekend.  My plan was to sew, sew, sew.  But when I got to my sewing room, my machine didn't work!  The needle wouldn't move, and there was an error message on the screen!

Mind you, my oven has not worked for TWO YEARS and I'm OK with that, but I went into a near panic when I couldn't sew.  I took the machine apart, cleaned and oiled everything, and put it back together again.  I don't know what the problem was, but I got it working again after about two hours.  Whew!  I made two April Block Lotto bird blocks just to be sure. 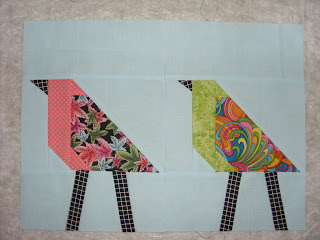 By then, it was too late to do much else, so I went to bed.

Saturday morning we led the Pledge of Allegiance at the MS Walk with the cub scouts, then walked a couple of miles with the other walkers.  We ran errands, and then I hopped on the highway to travel the 150 miles roundtrip to Donald's best friend's house to pick him up for a sleepover.  They've been friends since the infant room at daycare, so it was rough on both of them when Evan moved away two years ago.  We try to still get them together a couple times a year.  They are so cute together, picking up right where they left off, talking a mile a minute, and never getting into disagreements.  Evan is welcome at my house anytime!

When we got back to town, we went to the First Annual Monacan Round Dance - native american drumming and singing and crafts and regalia - it was cool!  Then, back home for a couple of hours in the spring sunshine before heading out to the Drive-In where I was volunteering for the evening.

Today was not the day of rest I had wanted.  While Evan and Donald played all morning, I packed an enormous box for Goodwill (trying to clean and purge), and then treated myself to sewing on the binding on baby Ella's quilt.  I'm only about a third of the way done sewing the back down, but I hope to finish tomorrow afternoon.  Yay, I might even have something for Show and Tell at this month's Guild Meeting!


After Evan went home, it was off to lead a cub scout den meeting.  Today, they earned their Marbles belt loop - I had forgotten how much fun it is to play marbles!  Then a quick visit to a friend who was purging some fabric (I promise, I didn't bring home even a fraction of what I took to Goodwill!), and then dinner with my friend, Michelle, and her family.  We have a standing invitation every two weeks, and I love going because not only is the food always amazing, but it is nice to spend time with another woman who is also surrounded by boys and men, an understanding ally in the friendly battle between estrogen and testoterone.  Today, it was especially wonderful to go because I had to come home and do even more cleaning.  Our house in on the market - since I have given notice at work, we MAY need to downsize.  That saddens me because I love my house and because moving is such a pain, but the house hasn't been this neat since we moved in nine years ago!  Anyway, there's someone coming to look at it tomorrow, so as much as I despise housework, it had to be done.  Right now, I'm exhausted, but happy.  And tomorrow, Adam and Jason will be home again.

A clean and full house, can't beat that!
Posted by Vesuviusmama at 8:27 PM

Oh, wow, you made me breathless - and I remember those kind of weekends in the past.

I'm exhausted just reading about your life. Too bad you have to move. Your place looks so lovely.

You sound like you had a very busy day! I love that busy fabric...good choice! ♥♥♥

I love your block lotto blocks. It sounds like you had a very busy weekend!

Sounds like the machine ailment was just a "I'm feeling forsaken" alert! You did 'good' on that one! Thank you for the "Thank you" post card (so unnecessary, but delightful!) Have an awesome week!! Hugs, Doreen

You always seem to pack about two weekends worth of stuff into one!

My goodness! I think a nice long nap - or failing that at least a cup of rich deep hot chocolate with whip cream on top - is definitely in order! You have been one busy little girl! So glad you got the machine back up and running and escaped that near disaster :*)

Are you sure that was just ONE weekend...tired now, need to go lie down and all I did was read your schedule!! A non-working oven easily got around...a non-working sewing machine crisis! Glad you got it working again, hope it stays that way, naughty sewing machine...

I'm impressed that you got your machine working again, and know you are happy about that. Quite an accomplishment! As usual, your weekend sounds anything but restful. I am so sorry to hear that you all are thinking about or planning to downsize from that beautiful piece of property, but if you do I hope you get a BUNDLE for it!!