Do you ever have a string of failures so long that you think you should be banished from the sewing room forever?  That was me this weekend.  And it's my own fault.  This Saturday was our guild Christmas party, and I wasn't prepared with my gift to swap.  It was supposed to be small, something valued at $10 or less.  On Friday night, I wrapped 4 Urban Circus scraps (each less than a fat quarter but more than a fat eighth) together with a ribbon to start things off, but I wanted to add more to my gift.  I should make something, right?  I trotted down to the sewing room with my iPad and all the inspiration that can be found on the World Wide Web.

First, I tried some fabric origami to make an ornament - FAIL!


Then I tried to make a hexagon needle holder - FAIL!
(photo from http://mythreesonsknit.blogspot.com/2010/05/hexagon-needle-book-tutorial_1452.html) 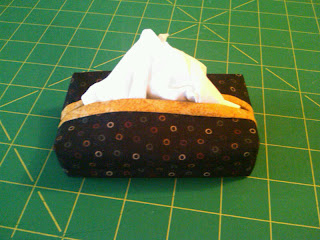 ﻿(How did I fail with this when I've already made so many and they are SO EASY, you ask?  I got carried away boxing the corners and made them into tall, narrow fabric containers.  They are still cute, but there is no way tissues will fit in there!)
I'm getting frustrated now - how about one of those cute little fabric tote bags that I made a couple Valentine's Days ago?

﻿Where did I find that tutorial online? - - - fast forward a couple of HOURS, and I STILL couldn't find the tutorial.  Then, in a belated stroke of sanity, I remembered that they were called "baskets" not "totes" and I found the tutorial first try!  By now, however, it is so late that I can't see straight and would not be safe with sharp instruments.  Off to bed and I'll try again in the morning.


Saturday morning rolls around and I head down to whip up one of those little baskets.  An hour should be enough time, right?  Well, it SHOULD have been, but it turns out that 1) I am not looking at the same tutorial as before - this basket is different and bigger, but OK, I'll go with it, but then 2) I sewed the darned thing inside out and had to haul out the seam ripper for a workout.  By this time, the meeting is starting without me, so I gave up.  :(
On Sunday, thinking that maybe I've got the gremlins out of my system, I ventured down to the sewing room again.  I fixed the basket.  OK, this is good.  I made two travel tissue covers.  All right, maybe my sewing mojo is back.  But did I contine to ease my way into things?  Heck no!  I chose CURVES!!!
Truth is, it worked out.  While waiting for our take-out pizza to be ready, the kids and I wandered around Goodwill, where I found a twin flat sheet the color of an Orange Creamsicle that I was inexplicably drawn to.  What on earth could I make with that?  But somehow, it landed in my basket, along with a king sized flowered pillowcase.
A few hours later, after the pizza was gone and the kids were happily ensconced with a Christmas movie they've never seen before, I started sewing some Drunkard's Path blocks, no pin style.  And they worked!  Check out what I have so far:
I have no idea what I will do with it, or who would want an upcycled creamsicle-colored quilt, but the sense of accomplishment I got from sewing something without mistakes and for a whopping total of $2.50 for the materials, it was definitely worth making.  I stopped when I realized that I should have added the alternating strip of 2" squares to the other two sides before adding the outer border - I'll figure that out tonight.  But I tell you, last night I dreamed of Orange Creamsicles, which I haven't even seen since I was a kid. 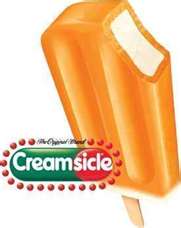 I think we all have days (or weeks ) where nothing goes right. I'm usually kind to myself and pop down the shops and buy something when things go horribly wrong. You have to know when to fold baby!

Im glad you whipped out something beautiful in the end.

:) No pressure sewing - love it.
Bernie

Oh gosh, I've had FAIL days in the sewing room too. Sometimes you just need to put it away and go to bed, eh? I'm glad something finally worked out for you!

Whew! I read this just in time! Our quilt group party is Friday. Yes, I need to take a 1,000 yen gift. I have been looking all over, finding nothing, and thinking I might make something.Two days left...

So did you see our houses displayed on Beth's blog right next to each other? Maybe this means we'll both win some houses!

come by my blog today for a chance to win " Word Play quilts" by Tonya Ricucci. Quiltmaker is giving it away
today only!

Happy Sewing and Merry Christmas...
now go buy yourself a Creamsicle you deserve it after all that sewing!

Oh dear me! You have had a go, haven't you!!! I hope you are all chilled out and ready to stitch away! Take a deep breath!

Oh I meant to say if you pop to my tutorial blog you could have seen some ideas on there for your little gift.....
janslittlebitextra it is called.

Those colours are lovely! And I'm not much of a pastel girl.