If you read yesterday's post, you know I was feeling pretty low. Not so anymore.

First, I showed up at the karate test early and someone had found and brought my top. Yay! I'll still have to do 50 pushups at class next week, but at least all my hard work was going to pay off. The test itself wasn't perfect. I fell down doing a spinning hook kick, a kick I have done thousands of times. I sat in shock for a moment, but then jumped back up and got going again. I got kicked by the girl next to me. Ouch! I have a bruise, but I asked the instructor if we could spread out a bit, and we kept going. During knife defenses, I completely forgot one of them. My partner was gracious and told me what to do and we completed it successfully the next two times through. At board breaking time, I cleared my earlier mishaps from my mind and kicked through that thing like it was nothing - I knew I could. Triumph! Then, at the end, when we received our pre-black belts and were listening to our instructor ramble a bit before dismissing us, he told us that the theme for the Pre-Black Belt class is INDOMITABLE SPIRIT. It was like a light went on in my heart. THAT was what was lacking in me lately. Life has been hectic and stressful with a couple disappointments lately, sure, but I can't affect what happens TO me, I can only affect how I RESPOND. And I should be responding with an INDOMITABLE SPIRIT. No more loser posts, guys; I've got a new mantra!

The day just got better from there. I swung by the restaurant, and they had found my camera. Yay! I feel the need to go sew something so I can take photos! If nothing else, I can't wait for the karate studio to open back up next week so I can take a photo of the quilt I made for Master Clements.

I took the kids to the community (indoor) pool because they were have a free family fun swim for two hours. We were there for - you guessed it - two hours! Then, since it is the end of the month and I only get paid once a month and I am broker than broke, I took the kids to a restaurant in town where I had a gift certificate. We did a great job of not spending more than the gift certificate, but when we got to the register, we found out that the gift certificate was for the sister restaurant in another town. Oops! But with my indomitable spirit attitude, I told the kids we were going to be able to eat out again soon! Then off to the grocery store to pick up a few necessities, again with a gift card that I had been carrying around for a rainy day. We had fun trying to spend exactly that amount of money, and managed to just go over by 2 cents, but everyone has 2 cents in the bottom of their purse, right? Then, it was off to the drive-in movies, where I was volunteering so we could all watch both the movies for free, plus get free popcorn. If only I had gone to the right restaurant, we'd have had an entire afternoon and evening of free food and entertainment, but as it stands we did all that only spending $11.

I'm not always so poor at the end of the month, but not only did we have our huge twice annual heating bill due this month, but we also bought the home theater seating. Check it out! (and yes, I know that we STILL haven't painted down there, but I think having the furniture there will inspire me to get going on that project.) 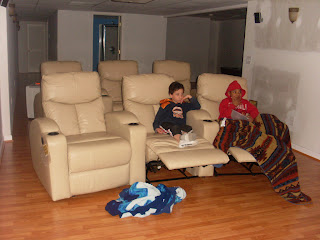 The kids were the first to try it out. I'm pretty sure the delivery truck was still in our driveway when I took these photos. 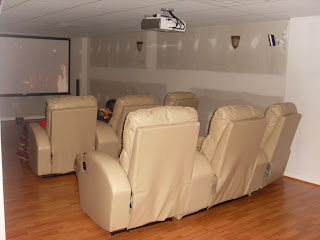 I still haven't watched anything down there, but I have tried out 4 of the six chairs and they are COMFY! I'm gonna have to start watching more TV and movies just so I can sit down there! In fact, that's where I will likely spend a chunk of time today when I am not sewing and cleaning house a bit. Have a great Sunday, all!
Posted by Vesuviusmama at 5:32 AM

Yay.....now it sounds like our Erin!! I'm glad your day was spectacular and enjoy the movies!!

I am so glad things are turning around for you! I would not be happy to lose my camera and it is great that it has been found! Looking forward to more happy posts and pictures soon. Gail

Sounds like you have rebounded in your normally enthusiastic self! So glad you found your camera!! Your theater room is amazing. I think I would have trouble staying awake to watch a movie in those chairs - they look so comfy.

Im going to try and take some of your positive attitude this week and apply it to my own life. I have a really busy week coming up and can already feel myself expecting it to be yuk. We'll see how practicing having an indomitable spirit helps me.

I'll be over Saturday night eith my own popcorn, Your home theatre set up looks so cool!

So happy that things are looking up for you!! It really gets a person down when that many things go wrong.

I love your theatre room!! My kids would love it!